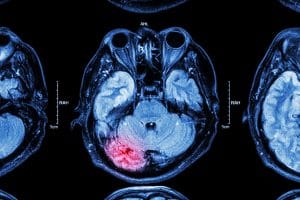 Brain trauma, also called traumatic brain injury (TBI) is a damage to the brain caused by a sudden trauma to the head.  TBI can be caused by such incidents as a blow, jolt, or bump to the head that creates enough force to cause the brain to impact the inside of the skull.  TBI can also be caused when an object pierces the skull and enters the brain tissue.  Toxic insults to the brain can also cause brain damage and are referred to as acquired brain injury (ABI).

Each year, millions of people visit emergency departments due to TBI.  Concussions are milder cases of TBI and are often overlooked by emergency departments.  A minority of patients experience long-term or permanent effects of mild TBIs, including concussion.  It is a myth that all mild TBIs resolve in a few weeks or months.  More severe TBI can cause permanent brain damage or death.

According to the Mayo Clinic, most common causes of traumatic brain injuries include:

Males are more likely to suffer a TBI than females, and children (newborn to age 4), young adults (between 15 and 24), and people over the age of 60 are at the greatest risk of traumatic brain injury. People 75 years or older have the highest rate of TBI, likely due to more frequent falls.

Identifying the signs of TBI

Traumatic brain injuries are generally categorized as either mild, moderate or severe. These categories are misleading because a minority of mild TBI victims experience permanent symptoms. A mild traumatic brain injury (mTBI) can lead to:

The symptoms of a mild TBI may go away on their own within hours, days or months of the injury. No two people respond the same to a TBI. Any person who suffers a loss or alteration of consciousness after a head trauma should be seen by a medical professional.

A moderate-to-severe TBI can present with many of the same symptoms as a mild TBI, but the effects of those symptoms may be more serious, or last for a longer period of time. In some cases, the symptoms may be permanent:

Children have their own unique set of symptoms that can be especially hard to analyze, because children often are afraid to say or incapable of saying what’s bothering them. If you believe your child has sustained a TBI, you should seek immediate medical attention for him or her.

At Phelan Petty, our Virginia traumatic brain injury lawyers have the experience and resources to help TBI victims and families get justice. To discuss your rights and how the responsible parties can be held accountable, call us at 804-554-3589 or fill out our contact form to schedule an appointment.

← More Infant Rockers Recalled Due to Safety Risks: What You Should KnowLiability for Deaths and Injuries Due to Defective Children’s Products →

Michael Phelan has been consistently recognized for his excellence as a trial lawyer, his commitment to research, his outstanding communication skills, and his sincerity and dedication. As one of his valued clients said, “Mike puts his heart into it."

View all posts by Michael Phelan →