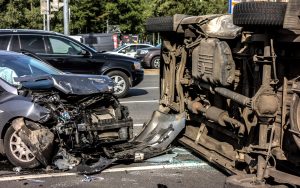 Over the past two years, we have seen countless news stories about the rising number of traffic fatalities in Virginia and across the country. In April, the National Highway Traffic Safety Administration (NHTSA) released its estimates for 2021, and it is official: there were more traffic fatalities last year than in any of the past 16 years.

Any increase in fatal traffic accidents is cause for concern, but these numbers are especially alarming because they occurred at a time when fewer vehicles were traveling. Russ Martin of the Governors Highway Safety Association told Axios that “An increase in dangerous driving — speeding, distracted driving, drug- and alcohol-impaired driving, not buckling up — during the pandemic, combined with roads designed for speed instead of safety, has wiped out a decade and a half of progress in reducing traffic crashes, injuries and deaths.”

Road design plays a critical role in the way we travel, and poor designs can lead to accidents. To understand how, though, we must first look at the way traffic accidents are analyzed by government agencies.

The NHTSA has recorded “critical reasons” for traffic accidents and fatalities for years. The critical reason is “the immediate reason for the critical pre-crash event and is often the last failure in the causal chain of events leading up to the crash” (emphasis ours). There are only three categories of critical reasons: drivers, vehicles, and environment.

Unfortunately, when people see “critical reason,” they assume it is the cause of the crash, not the final action in the moments before it. In 2015, the NHTSA issued a report about these critical reasons, which led to the infamous misunderstanding that 94% of all accidents were caused by driver error. In fact, this was hardly the case. What the NHTSA actually said was that it was able to assign a critical reason to drivers in 94% of cases.

In short, drivers’ behaviors are often listed as the factor before an accident, but those behaviors are not necessarily the root cause of the accident. The NHTSA specifically said that “in none of these cases was the assignment intended to blame the driver for causing the crash.” But the government (and news reporters) were so focused on determining those critical reasons at the end of an accident that they didn’t spend much time looking for the causes, which is why road design is often overlooked.

What makes a road unsafe?

There are a lot of reasons a road’s design can be unsafe. The most obvious include factors like poor visibility around curves or up and down hills, lack of signage to indicate changes in traffic patterns or on- and off-ramps, or lack of streetlights. Poor road design can cover everything from subpar asphalt to missing rumble strips to lack of crosswalks and medians.

But some of the most dangerous roads are the ones we travel every day: long, straight highways and interstates that inadvertently encourage speeding. These are the roads that go on forever, it seems, and they have been romanticized in American culture for years. Think of all the writers who talk about the call of the open road, or any luxury vehicle ad you’ve seen for the last two decades: they almost always feature wide, open highways. These are roads designed to get a driver from Point A to Point B as quickly and efficiently as possible.

Yet that push for efficiency can create issues of its own. For example, the monotony of these roads can actually lead to a phenomenon called “highway hypnosis,” a trance-like state people enter while driving that leaves them unable to recall time spent on the road. Per Healthline:

In other words, your brain switches to a less-alert mode and begins to pay less attention to visual stimuli.

As you can see, the very design of the road can lead to distracted, inattentive driving, reducing the ability to react to emergency events like a car hitting its brakes or debris flying off the back of a truck.

A breakdown of Virginia’s most dangerous road: Route 460

Let us look at how poor road design contributes to accidents at home. WFXR reported in 2019 that Route 460 was the deadliest road in Virginia, accounting for 190 crashes and 208 fatalities. It’s been a dangerous road for the last decade at least, for a number of reasons:

Route 460 is so dangerous in some spots that in 2020, the Commonwealth Transportation Board (CTB) approved a plan to eliminate about 1.5 miles of roadway in Bedford County – a curvy part of the road that limits visibility.

And this is just one road; there are many in Virginia with the same design flaws.

What can be done to make roads safer?

The U.S. Department of Transportation (USDOT) is hoping to use some of the money from the infrastructure bill to implement a new approach to road safety. The National Roadway Safety Strategy has adopted a “Safe System approach as the guiding paradigm to address roadway safety.” Part of that overall system focuses on making roads safer by “incorporating design elements that offer layers of protection to prevent crashes from occurring, and mitigate harm when they do occur.”

Some ways to make roads safer can include:

None of these efforts can exist in a vacuum, and it could take years before these updates are made. In many parts of Virginia, thousands of miles of roadway are in poor condition; why not take advantage of the opportunity to rebuild and redesign them with safety of all in mind? It seems the right time to do it.

Phelan Petty is a Richmond-based law firm serving the injured throughout the Commonwealth. If you sustained injuries in a car, truck, or motorcycle accident, we may be able to help. Please call 804.980.7100 or fill out our contact form to schedule a free initial consultation.