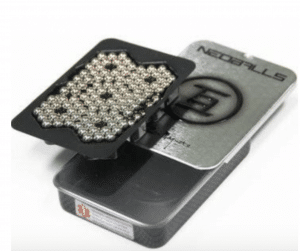 The Consumer Product Safety Commission (CPSC) released a mandatory recall of two magnet ball and cube products due to ingestion hazards. Because of these high-powered magnets, the risk of ingestion can lead to fatalities. Further, because the company refused to agree to a voluntary recall, the CPSC sued the manufacturer to force a mandatory recall.

The magnets, sold by Zen Magnets LLC of Denver, CO, are sold under the names Zen Magnets and Neoballs. Geared toward adults as “desk toys,” these magnets are about the size of a BB gun pellet and much stronger than the average refrigerator magnet. Although the company claims they are marketed to adults, the magnets are attractive to young children and can be extremely dangerous if ingested.

In a press release, the CPSC stated:

When high-powered magnets are swallowed, they can interact with each other or other metallic objects (material attracted to magnets) and become lodged in the digestive system. This can result in perforations, twisting and/or blockage of the intestines, infection, blood poisoning, and death. These injuries can occur when infants, toddlers, and teens access and ingest the magnets, including, for example, when teens use the magnets to mimic mouth piercings and swallow them inadvertently.

They also note that between 2009 and 2018, U.S. hospitals saw at least 4,500 magnet-related injuries from ingestion, as well as two fatalities, with most of the victims under 16 years old.

About the magnet recall

The CPSC recall involves about 10 million magnets, which includes units sold both individually and in sets. Zen magnets were available in sets of 72, 216 with six spares, and 1,728 with eight spares. Neoballs were sold individually or in sets of colors including silver, gold, red, orange, green, red, blue, and purple.

The CPSC notes several reports of children ingesting these magnets and requiring surgery, as well as the death of a 19-month-old girl.

Consumers should stop using these magnets immediately, put them where children cannot access them, and contact Zen Magnets at 1-844-936-6245 or email at contact@zenmagnets.com for more information. You can also report an incident with Zen magnets on the CPSC website.

As mentioned earlier, the CPSC issued this mandatory recall because Zen Magnets did not issue their own voluntary recall. Founder of the company Shihan Qu posted his own statement following the CPSC’s announcement, which said in part:

Zen Magnets is honored to have been the leading voice of the majority of consumers who believe that adults should be able purchase recreational high powered magnets, in the CPSC’s continual and uncompromising War on Magnets. We’ve been offering a voluntary recall since 2016 allowing customers to return magnets for a refund for any reason, including if they didn’t feel safe with them, didn’t think they could keep them from being swallowed, or was unable to understand why they are dangerous, or didn’t like the name Zen Magnets.

Regardless of what Qu says, the truth is that these magnets are dangerous. In fact, these types of magnet products are so hazardous that the CPSC has an entire educational website for consumers. This site contains information on previously recalled magnet sets, companies in violation of federal safety standards, educational videos, and more.

Adults should always keep small magnets, as well small objects containing magnets, safely away from small children who may swallow them. Parents and caretakers should also regularly inspect children’s toys for missing or dislodged magnets. You can search for any product recall at the CPSC.

Who is liable if my child is injured by a dangerous product?

If your child suffers serious injury from a dangerous or defective toy, an experienced product liability attorney can help you determine who should be held accountable. A product liability case makes the claim that the toy or product was defectively designed, manufactured, or labeled – and that defect caused your child’s injuries and losses.

Your attorney can help show negligence and liability on the part of the product manufacturer, as well as seek compensation for your child’s injuries and losses.

When companies refuse to take responsibility for the harm they cause consumers, the product liability attorneys at Phelan Petty will step in and hold them accountable. If your child was injured by a dangerous or defective toy, we can help. Contact our offices today at 804-980-7100, or fill out our contact form. We serve Richmond and all of Virginia.