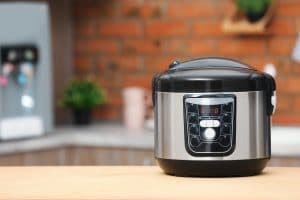 A number of lawsuits have been filed against NuWave LLC, alleging that their pressure cookers – specifically, the NuWave 6Q Nutri-Pot 6Q Digital Pressure Cooker” – have a design defect which allows consumer to open the lid of the cooker when the pressure is high enough to cause injury. Because of this defect, multiple plaintiffs allege that they  sustained injuries as a result of scalding liquids being ejected out of the pressure cooker.

If the cover is secured by a twist-lock arrangement requiring a rotating force exerted between the vessel and its cover, the vessel is to be clamped so as to be held stationary. The outermost point of any cover or cover handle is to be attached by a cable to a spring scale capable of being used in the range of 100 pounds (45.4 kg). The arrangement shall provide the application of a line of force of 100 pounds (445N), maintained at 90 degrees to the radius of the point of attachment, from a remote or protected location.

This is more force than the ordinary human could apply manually, yet these cookers are opening under pressure when the indication to the user is that there is no pressure.

NuWave has specifically advertised its pressure cooker lids as being safe, stating that their Sure-Lock System ensures that the lid stays locked until the cooker depressurizes. The lawsuits allege that NuWave’s representations regarding the safety of their lids is false, and that NuWave continues to conceal the defect.

As a result of this defect, multiple plaintiffs have sustained physical injuries caused by the scalding steam and liquid in their pressure cookers.

What kinds of injuries are caused by defective NuWave pressure cookers?

The most likely injuries caused by defective NuWave pressure cookers are burn injuries. Scalding steam and liquids can splash onto the hands, arms, chests, neck, and faces of consumer who remove the defective lid before the cooker depressurizes. These burns can be severe enough to cause permanent scarring and disfigurement.

What should I do if I have been injured by a NuWave pressure cooker?

If you sustained injuries from a defective NuWave pressure cooker, you should stop using the cooker immediately. Do not throw away your pressure cooker. Our product liability attorneys will have the cooker examined and evaluated by an expert as part of your claim.

Pressure cookers and appliances that perform similar functions in the kitchen are popular with everyone from amateur, at-home cooks to professional chefs who work in in commercial kitchens. These cookers are used every day to prepare meals quickly and easily. In fact, you may have one these cookers in your kitchen right now.

The pressure these cookers build up is equivalent to the pressure generated within a forcefully shaken can of soda. The difference is that a pressure cooker operates at temperatures that raise the liquid contained in the cooker to more than 200 degrees Fahrenheit. Many people across the nation have suffered burns from scalding hot liquid contained within these cookers when they have malfunctioned.

As a result, many lawsuits have been filed against the manufacturers of these defective products, claiming burn injury damages. Some models have also been recalled.

The most common injuries from pressure cookers are burn injuries, including everything from 1st to 3rd degree, inflicting damage over a large portion of a person’s body. Many of these injuries leave victims susceptible to infections, and in some cases result in amputation.

The most common types of pressure cooker injuries are second and third degree burns from explosions, spills of hot liquid, and steam.

Some of the pressure cooker defects that can lead to burn injuries are explained below:

Injuries and burns from pressure cookers can result in scarring, scalding, hospital or ER visits, skin grafts or other types of surgery.

A pressure cooker injury lawsuit could help you recover from the injuries and other damages you have sustained. Some of these damages may include:

If you have sustained injuries from a defective pressure cooker, you do not have to pursue the recovering of your damages alone. An experienced defective product attorney can help you at this difficult time.

Phelan Petty is handling pressure cooker explosion cases, including a NuWave case. We stand as your strong advocates for justice and compensation if a defective or dangerous product such as pressure cooker has caused you injury. If you would like a free consultation about your case, one of our experienced, Richmond product liability attorneys can help. Give us a call today at 804.980.7100 or leave us a message through our contact form to request an appointment.