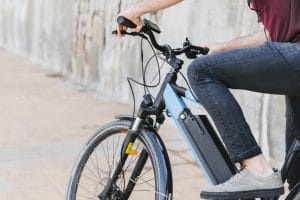 An electric bike is powered by rechargeable lithium batteries. Riders use the electric motor to power them through hills, headwinds, or fatigue. These bikes can also travel as far as 60 miles and travel as fast as 20 mph per federal and state regulations.

The danger of rechargeable lithium-ion batteries in bikes

Lithium batteries are also the power source for electronic cigarettes, hoverboards, laptops and cell phones such as the Samsung Galaxy Note 7. All of those products have been in the news for battery explosions and fires.

Battery fires and explosions are on the rise

Batteries explode for a variety of reasons. It is easy to think that a dramatic explosion will not happen to us. But when your pants pocket, e-cigarette or laptop is suddenly ablaze, it is important to understand your legal options.

Unfortunately, battery fires and explosions are becoming more prevalent. According to the Consumer Products Safety Commission, companies issued at least 49 lithium-ion battery recalls between 2012 and 2017. The recalls affected over four million products and devices, including cell phones, tools, hoverboards, scooters, and laptops.

Lithium-ion (Li-ion) batteries have been commercially available since the 1990s, but they have become increasingly powerful in recent years. Because we rely on lithium-ion batteries every day, they may seem harmless and mundane. However, they are powerful and potentially harmful – especially when they are improperly designed or manufactured. Many of the lithium-ion batteries used in this country were made in China in plants where quality control is problematic. What’s worse is that some Chinese companies have been known to buy from other manufactures batteries that have been rejected by the manufacturer for quality reasons. The company re-wraps the defective battery in its own label and sells the re-wrapped or fake battery to unsuspecting consumers.

Today’s Li-ion batteries store massive amounts of energy in a small space. To understand the risks associated with lithium-ion batteries, you need to know how they work. Cylindrical lithium-ion batteries contain what is referred to as a “jellyroll” wrap consisting of three, flat layers that are rolled up like a carpet to fit inside the metal canister. The middle layer is a thin (12-25 microns), porous membrane called the “separator.” The separator separates the two outer layers, which are the positive and negative electrodes. Chemical electrolytes are added to the mix before the canister is sealed. The separator is permeable to ionic flow but prevents contact between the electrodes.

A breached separator results in an internal short circuit. A separator can be breached if it is defectively made or if the manufacturer’s assembly process results in manufacturing debris or welding burrs which, over time as the cell expands and contracts as it energizes and de-energizes, wear through the separator. The short circuit causes internal chemical reactions that generate more thermal heat and gas pressure than the battery cell can dissipate. This is called “thermal runaway,” which, if not properly vented, will lead to fire and even explosion.

As technology develops, there is more demand for products that are light, slim, powerful, and cheap. Unfortunately, these four elements can struggle to co-exist. This is especially true with cheaply-made lithium-ion batteries.

Could safer battery storage reduce the risk of fire?

The growth of electric bicycle use in the U.S. may decline unless a feasible and workable solution is found to avoid the dangers associated with igniting and exploding lithium-ion batteries.

Until the right consumer-level, certified battery storage container solution arrives, bike owners can protect themselves by applying these tips:

The Richmond product liability attorneys at Phelan Petty are here to help you obtain the financial compensation you deserve if you were injured by a burning or exploding electric bike battery. To schedule a free case evaluation, call us today at 804.980.7100 or use our contact form.

View all posts by Jonathan Petty →