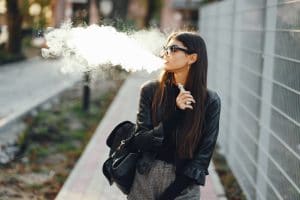 If you use electronic devices such as electronic cigarettes, vaporizers, smartphones, laptops, or other mobile device, then you most likely use lithium-ion batteries. These batteries are usually the power source for these types of devices. The key to whether any of these devices operate safely is whether the battery overheats. In recent years, there have been numerous reports of thermal runaway, fires and explosions occurring in e- cigs, the Samsung Galaxy Note 7 cell phone and some laptops, including on passenger airplanes and at airports.

On the afternoon of April 15, travelers making their way through the McCarran International Airport in the Las Vegas area were disrupted by a vape pen battery ignition incident. Early that afternoon a large sounding bang sent a number of people running towards an emergency exit.

Eventually the chaos settled down after the cause of the noise was found to be an exploding e-cig battery. The battery had been charging, and when it was overcharged, it short-circuited, experienced thermal runaway, and exploded. Fortunately, no one was reported injured and the incident was deemed an accident, but situations similar to this have occurred on flights in recent years. Over a three-year period, e-cigs combined with rechargeable lithium-ion batteries powering these devices have been responsible for fire and smoke incidents on airplanes or in airports more than 30 times.

Although other electronic devices with lithium-ion batteries have occurred on passenger flights, there is a particular threat of fire and explosion connected with these batteries when powering e-cigs. According to the U.S. Fire Administration (USFA), these batteries are not a safe energy source for any type of vape pen or e-cig.  Many e-cig devices and batteries used in them are made in China.

There are two electrodes within a lithium-ion battery – an anode and a cathode. These two electrodes are separated by a film which holds liquid electrolyte that is combustible. Imaging of multiple exploded Chinese batteries have shown that internal short circuiting is often caused by shoddy manufacturing- burrs or debris left inside the battery penetrate the separator resulting in internal short circuiting, thermal runaway, fire, and explosion. Batteries have exploded when not being charged or even used to power a device. There are many reports of batteries exploding in a person’s pocket, even though there was nothing else in the pocket other than the spare battery.

Most e-cigs and vape pens have a cylinder shape with the mouthpiece located on the opposite end from the battery. If the battery explodes, the cylinder shape of the vape pen can carry the fire and explosion toward the open end of the device and inflict severe burns on an individual’s mouth and face, including the eyes, in addition to the neck.

An e-cig has the potential to explode anywhere, including on a passenger aircraft, in an airport, or in a suitcase or backpack. If the lithium-ion battery short-circuits for any reason, it can ignite the electrolyte and cause an explosion.

If you have sustained injuries as a result of an exploding e-cig, regardless of whether you or someone else was using the product, you may have the right to collect compensation for the physical and other injuries you have suffered. Our Richmond defective battery attorneys at Phelan Petty are here to evaluate your case and pursue the monetary recovery you deserve. To arrange a free consultation, give us a call today at 804.980.7100 or use our contact form to leave us a message.

← What Is Post-Concussion Syndrome?Small Study Finds Link between Placental Injuries and COVID-19 →

View all posts by Jonathan Petty →